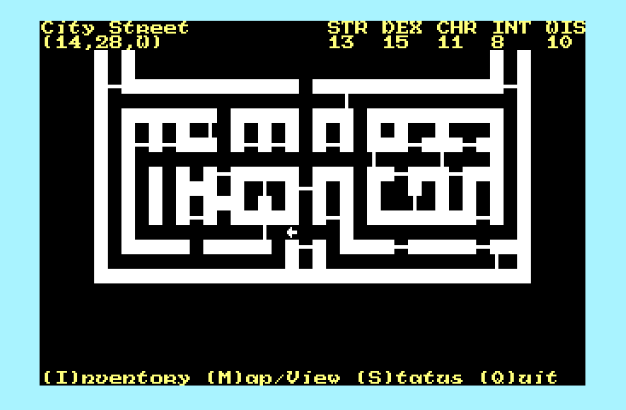 Since I last posted I’ve been doing most of my game development on a Raspberry Pi 3B+ under Raspberry Pi OS . There has been a little bit of a learning curve with getting this set up and some of the utilities I was using aren’t available under Linux but overall it’s working quite well. One of my biggest frustrations was getting a usable version of the Vice C64 emulator running. I failed to compile it successfully from source and ended up installing it using the PiKiss utility (https://github.com/jmcerrejon/PiKISS). Vice doesn’t seem to perform very well on my Raspberry Pi so I would appreciate any suggestions anyone can provide in how to improve its performance.

Most of my work on “The Citadel” has involved reorganising memory again. I’ve not successfully managed to move all my graphics into the top 16K of memory. The Commodore 64’s VIC-II chip can only see 16K of memory at a time and this top 16K of memory includes other things including the Kernel ROM. Usually these need to be “switched out” in order to access the RAM underneath but the VIC-II can apparently see the RAM underneath for character sets, the screen, bitmap graphics and sprites – very useful as I can continue to use the C64’s KERNEL routines such as print a character, screen the screen etc but also make use of the RAM underneath for graphics. This means that CC65 can use a contiguous block of RAM, around 50K just for program code and other data. This also means I was able to simplify my linker configuration file (as shown in my previous post) and remove all the segment references which have been a bit of a distraction when I’ve been using CC65.

I’ve moved the other data files such as map and wallset data onto a C64 disk image and I’m loading these into memory when the game starts. This seems to be working well and my program file is now down to around 15K leaving plenty of space for extra game code.

I’ve also added the feature of switching between the 3D view and an overhead map. Currently this just shows the half the map (32×16 locations) regardless of where you have explored but I’m going to modify this so that the map only becomes visible as you explore. So you can now move around the map either in the 3D view or in an overhead view. I need to think this through a bit as both views need to have their purpose and be useful. I thought the game should switch into 3D view when you have an encounter or enter a shop (if you’re not already in this view).

I also plan to make the map more interesting in terms of better use of characters and colour rather than just using simple blocks. I think I can now focus on adding some gameplay and have a brief playable demo out soon with some initial encounters and combat included.