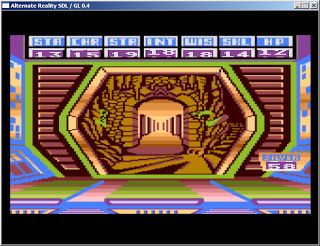 Finally managed to get the counters appearing in the right place on the gate sequence. Basically there are a number of different counters spinning round at different speeds. Pressing a key freezes the numbers and these become your character stats within the game. It also determines how much silver you start the game with.
It didn’t take very long to fix once I managed to understand the code – that’s the problem with using my old code from a few years back. I also tweaked the random numbers for the stats as they seemed a bit low and added in the “You are now joined.” message. Added in the original sound effects for this sequence. I will come back to this part of the game in the future but now feel that I can move onto something else. 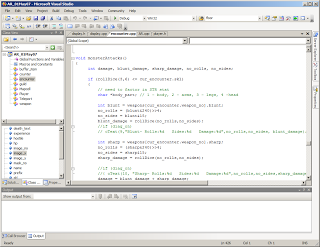 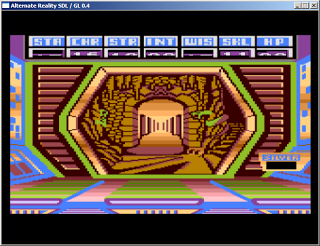 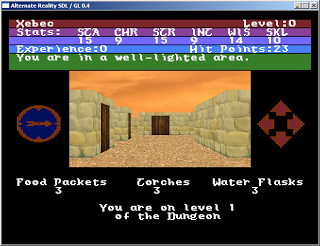 It’s been a while since I’ve released any updated versions of the demo so I’ve been thinking about what features I’d like to add next. I drew up a list but as it has a few dozen items on it I won’t repeat it here just now – too depressing!

One of the features of the original game that I hark on about all the time is the wide variety of objects you could find. There are large numbers of weapons, magical trump cards, scrolls, wands etc – certainly more than any other CRPG of the time that I can think of. Since version 0.4 I’ve added in support for dealing with the numerous objects in the Dungeon. So far I’ve added in some basic support for weapons. This means that you can now pick up any weapons dropped during encounters, equip them, swap them from primary to secondary and also use torches as weapons (they do both blunt and fire type damage). Different weapons have different effects during encounters E.g. don’t fight a Flame Demon with a Flamesword as it makes them stronger!

There are a lot of “specials” in the original game where you stumble across a special, one of a kind item. I’d 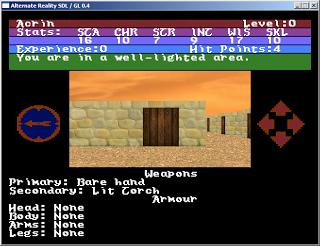 I still can’t help playing around with various graphics. The really difficult ones are the encounter graphics and shop interiors. My sensible side says use the original graphics for now and concentrate on replicating the game functionality but I’m also keen to try and update the look of the game a bit. The problem with graphics is that they are very time consuming to produce, especially if like me you don’t have any artistic skill. Ideally I was hoping a skilled artist might be interested in updating them but no luck so far. Eventually I’ll have a go myself. There seems to be no shortage of tutorials on the web! I’d also like someone to smooth out the AR font as I’ve doubled its original size making it look a bit blocky. If you’re interested in helping out let me know.

The other thing I’ve been working on is the portal room with spinning counters. I had this working nicely under my original SDL demo back in the mists of time but still don’t have the counters appearing in the right place since I’ve moved to SDL with OpenGL for graphics and increased the window size from 320×240 to 640×480. I know I should really sort something out with different window sizes and scalers but I’m leaving this for the time being. Currently the counters scroll out of sight – just need to spend a bit of time getting the coordinates right. Trial and error.