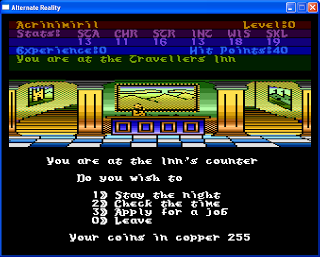 I’ve finally managed to make a bit more progress over the weekend, adding signs to the City doors and also adding some code to display City establishment images (E.g. Guilds, Inns etc) with some relevant menu text. A lot of time was spent capturing all the images for door signs and establishments from the Atati 8bit version. After a few attempts to add code to work out if a door should have a sign on it I decided to take the lazy route and simply use a different wall type. My map format uses an Integer for each wall which means I’m not limited to just a handful of different wall types to make up the City and Dungeon walls. Potentially this means that I could add more interesting details to later versions of the remake such as tapestries or mirrors or windows for City locations. The downside is that I have to manually edit the map entries for shop doors (OK I could write a program to do this but I haven’t yet). The map format is in a human readable format so it’s easy to find a map cell and edit the wall types. The other reason for this easy to understand map format is that I like the idea of creating a map editor at some point. Many areas of the City are difficult to get to so I’m keen to try and open up the map a little bit. It’s also possible someone else might be keen to write a map editor.
To date my Alternate Reality remake is looking like the Atari 8bit version though the view window is bigger and due to the higher resolution walls and signs are clearer from far away. City establishments contain additional menu items from the 16bit versions of the game. So for example visiting an Inn in the remake will give you the option to apply for a job (see above) – a feature which was never implemented in the 8bit version (it would have been added in a future scenario had they been created). I’m also modelling the menu system along similar lines to The Dungeon and the 16bit City as I find these cleaner and easier to read than the original Atari ones. One major change I’m considering for shops is making items selectable from a list rather than skipping through one item at a time in places such as the Smithy. I’m keen to start building up some simple shop functionality so that the remake starts to feel more like a game. Dungeon content has kind of taken a back seat just now. 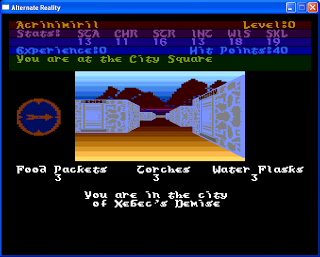