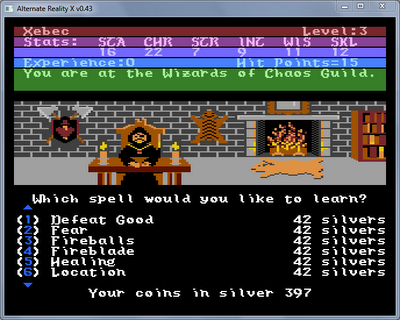 Work on the guilds is progressing well with the addition of guild lockers for depositing your gold, silver, keys etc. I did consider making it possible to add any item from your inventory as my object handler can deal with it but I decided to stick to the original and keep this option for a future release.

I’ve also started working on guild spells. I’ve got as far as displaying a list of spells and prices at each guild for learning new spells. This took a bit longer than expected as I reused my Smithy object menu code and had forgotten how some of this worked. Once purchasing is working properly then I’ll add the guild spell practice option and then spell casting whilst exploring and in combat. I’ll probably not be able to code up all the spell effects in one go but I’ll see how it goes. For now I just decided to make use of the spells in the Dungeon for those guilds in the City which never made it into the Dungeon. So you’ll be able to learn spells from the Star Wizards Guild and Physicians Guild but they’ll be ones from the Dungeon selection (35 different spells in total).