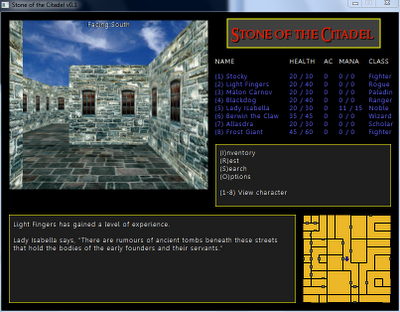 Whilst I’ve not mentioned it much recently Stone of the Citadel is still progressing. Here are a couple of new screenshots showing the use of background images for outside locations, a slighly smaller 3D view window and the beginnings of the map / scenario designer. You can switch between “play” and “designer” modes with a single key press at the moment, wipe the map data and start building your own SOTC map. As the map format is almost the same as that used by Alternate Reality X there is no reason why I can’t add a similar map and scenario builder to ARX in time.