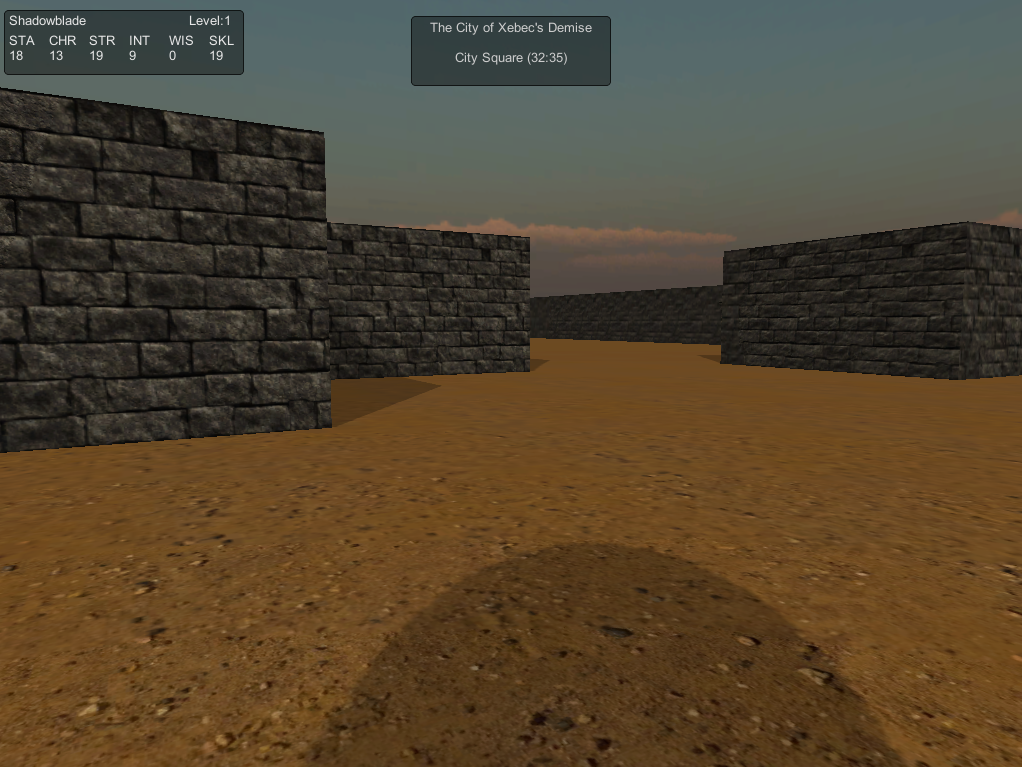 I spent this weekend planning and experimenting with various ideas for Alternate Reality X. I’d been away for a week and was keen to get stuck back into development of ARX but felt a bit unclear about what direction to take the project in given the opportunities now available to me since the move to Unity 3D. Here are a few of the things I worked on and thought about. Overall I’m pleased to say that after a couple of days experimentation and lots of note taking and thought I now feel a lot clearer about the approach I’m going to take and what I will be focusing on over the next few weeks of development – and keep it achievable.

I had considered at one point removing all references to Alternate Reality from the game so as to totally free me of any development restrictions or copyright issues but I don’t think this is necessary. I will keep the names and properties of places, items and encounters giving the game its identity in the Alternate Reality world but not restricting the project in terms of visuals or interface or gameplay enhancements I want to add.

I’ve updated the wall and ground textures over the weekend as well as the lighting effects which I think has made the game look a lot better. I tried out some building models but they felt out of place and were not a good fit for the original map. The map will for the most part now retain the same physical structure and grid based nature as the original but I will be adding other features to make this feel much more like a real place. Proper doorways and windows, roofs on some buildings, features on walls to distinguish different types of shop or locations as well as a variety of wall and floor textures to make the scenarios more varied and signify different areas such as the prosperous areas where merchants and nobles can be found as well as the “bad part of town” as the song says.


The Palace and Arena will have the same footprint on the map but will be visible from across the map and have multiple levels like the Dungeon (but visible). The Arena will resemble a high walled temple with pillars whilst the Palace will be a more traditional castle building with upper levels as well as a lower level within the Dungeon (where the Palace Dungeon is located). Lots of visual ideas and options here.

The Dungeon maps have been converted ready for adding into the game but I want to flesh out the City more before adding these. I also need to decide if obtaining access to the other scenarios is dependent on quests and encounters…

I have experimented with creating Unity terrains for the Wilderness but also to provide a more interesting landscape for the interior of the City. Expect this to be added in a future release. The Unity terrain options are potentially very powerful but take time to produce something good. I’ve lots of great props and textures to “dress” the scenarios in and I think this is going to transform the game. Props will be interactive so barrels and crates will be searchable (with the risk of the City Watch catching you) and shop signs / palace banners will swing in the wind.

“Shops” will be menu based for the time being in a similar way to the original game though the presentation of the menus and their content will not be identical. This is partly to allow new features (e.g. Selling items at the City Smithies, Attempt to raid a City Bank etc) but also to make the menus more consistent and easer to use. Encounters for now will be entirely menu based but I have a number of ideas for how to expand the encounters and add much more variety and interest to their nature. Expect to see some new types of encounter as well which may have made their way into the City from the Wilderness, Arena or Palace.

I worked a lot on encounters over the last few days including turning the player into a real game object with its stats and properties such as thirst, hunger and fatigue. Encounters are created from the same object class as the player. My idea here is to be able to treat the player (and any companions) and creatures you encounter as identical in nature so that I can reuse encounter code across individual and group encounters very easily. I also want encounters to have a much wider range of behaviour. Watch out for slavers!

You can expect new Windows and Mac OS X releases in the next couple of weeks. For this release I will be focusing on the encounters, combat and treasure. I’ll also be building up the player character more and adding the additional information screens such as wealth and weapons & armor.

If you like what I’m doing then you can support the game’s future development through Paypal or Patreon. This support really makes a difference in allowing me to continue development and devote more time to the game. You can also spread the word through Facebook, Twitter and Google+.