One of the things that has struck me when play testing my current build of Alternate Reality X is that there are still numerous places where the player comes across the entrances to the unfinished scenarios – The Arena, The Palace, The Wilderness and Revelation (there aren’t any for Destiny).

As I’m planning changes within ARX to better support the City and Dungeon, it’s helpful to think ahead as to how the other scenarios might develop and what features and content they may include. I thought I’d collect my ideas here as the beginning of a design document for Alternate Reality: The Arena. I see the Arena and the Palace as quite tightly interwoven in terms of features and story so there might be some cross over here. Through your trials in the Arena you can obtain fame and fortune, increasing your social status and gain initial access to the Palace. 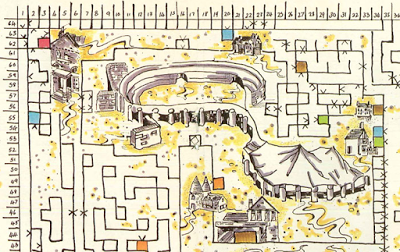 Entry to the Arena can be gained through an unsuccessful enounter with a gang of slavers, as a spectator or persuading one of the local lords to support your entry to the Arena with the goal of becoming the Champion of Xebec’s Demise and receiving the royal seal which grants access to all areas of the City (including the Palace). Whispers in dark taverns mention other, more secretive ways of entering the Arena.

The upper level houses the Great Arena itself as well as smaller Arena pits and shops which support the day to day running of the Arena. Both commoners and nobles visit the Arena from the City to watch the games whilst fighters seek their fame and fortune or meet their fate on the bloodstained sands of the Great Arena. Combatants can also move around with a degree of freedom between events looking for ways to improve their skills. A successful Arena fighter will make use of the weapons masters and trainers that have forged a living selling their services within the walls of the Arena.

The lower level of the Arena houses the darker side of the Arena where the poor souls who have been press ganged into slavery as Arena fighters live as well as housing the exotic creatures and traps that feature in the most deadly tournaments and games. Few have lived through the legendary Trial of Kings, a fiendish maze of traps and ferocious monsters that only the strongest and most cunning can hope to survive.