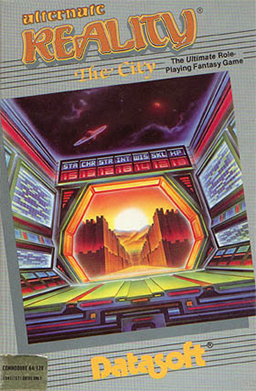 In early 2018 I came to the realisation that I probably wouldn’t be able to contribute much time to working on my port of Philip Price’s Alternate Reality (AR) series which I’d called Alternate Reality X (ARX). My last public release was on 21st May 2017 and personal issues had to take priority. Around the same time an enthusiastic AR fan made some changes to my ARX code and then started a brand new AR port written in Java. You can follow his progress at his webpage and on his YouTube channel where he posts update videos regularly. He’s put a lot of work into the project and I look forward to playing it when it’s available.

However, Looking back over my past blog posts and my journey developing ARX, I couldn’t help but feel a nagging desire to work on an AR related project of my own again. My time is still limited and I want to continue work on my own Commodore 64 game project though I have no hard deadline that I’m working towards on that project. Anyway I have a number of AR related ideas that I’m considering.

When I started ARX a number of AR fans expressed a desire for enhanced and expanded versions of the original 8bit games running on their original hardware. For me this would be the Commodore 64 and Atari 800. There are a number of positives about this approach and it would allow me to build on my recent experiences with 6502 assembly and coding for the Commodore 64. It has the major benefit that the games are already complete and I can just focus on enhancements without having to recreate code! It would also be an opportunity to hopefully unravel some of the mysteries of Alternate Reality that have eluded players for over 30 years by looking more deeply into the code and mechanics.

However, Not everyone wants to run games on old hardware. To address this I think it would be feasible to package up any enhanced versions with a suitable emulator to make for a smooth, single click experience on a modern operating system. There would of course be nothing to stop players from using their old hardware if they have access to it or emulator of choice on modern systems.

Writing for older systems does lead to some limitations that I think for me could actually be a positive. The hardware and storage restrictions mean I won’t go off on any tangents or wild goose chases, helping me to stay focussed on the core gameplay and playability. I have lots of ideas of features and improvements I would like to add.

This would be a challenging project with a high learning curve for me. Fortunately in 2019 we have a wealth of information, online communities and tools to help us understand the games and speed up modern development for these systems.

One option with a lot of crossover with the project above would be to build new scenarios using the core code from The City or The Dungeon as the basis for a new scenario. It should be feasible to replace the data for graphics, maps, locations, encounters etc with new content. Obviously some new game logic would be required as well for quests and special locations. Opening up and creating The Arena and The Palace within the existing areas within the game maps would also be a possibility.

If I were to consider this then I would be taking some time to review what I had done before and probably strip away lots of the code and partially coded features to make for a more solid foundation. This would take some time. I would probably remove the option for the enhanced graphics and focus solely on gameplay and new features. This doesn’t mean there wouldn’t be new graphics and sounds, just that they would be in keeping with the original 8bit style (or with minor improvements).

I would probably modify the code to make it straight C to give me the option of porting it back to the 8bit machines using CC65 as I wasn’t really doing any “proper” C++ coding anyway. The disadvantage of this approach is that I would have to recreate code from the original game’s 6502 assembly code or through observed behaviour through gameplay.

I’d welcome your thoughts or any other ideas you have that I haven’t mentioned.

4 thoughts to “Alternate Reality: A Return to Xebec’s Demise?”