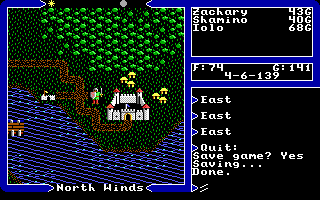 For many years I’ve been a big fan of the Ultima games and have always wanted to create a game of my own in a similar style. A couple of recent events have finally made me decide to actually start coding one of my own. The first was the release of the Simple and Fast Multimedia Library (SFML) which I think will be ideal for the sort of games I’m trying to create. The second was reading this article on Retro Remakes. The article is about writing an Ultima style game in a fixed 40 hour timescale. The game is called Inaria and further details can be found here.

I’ve always had a preference for the earlier Ultimas such as IV, V and VI. For some reason I’ve never really got into VII which is generally considered to be the best. With my own game I’ll be looking to incorporate what I think are the best features from the various ultimas along with ideas from more recent commercial RPGS and home brew roguelikes. I’ve always liked the style of these games which are usually characterised by simple 2D tiled graphics, a large world map and numerous towns and dungeons to explore. Other similar games include Wasteland, Phantasie and Questron.