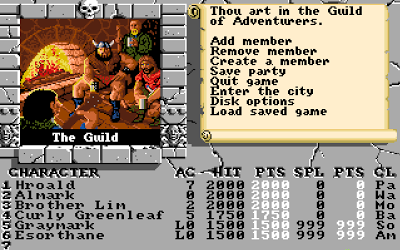 Your party of adventurers had to explore the city of Skara Brae as well as the dungeons beneath to destroy an evil wizard and free the city from his grasp. The game featured a 3D view of the city streets and animated pictures of the numerous monsters you encountered. Gameplay was combat heavy (even for a CRPG!) with large scale battles sometimes featuring multiple groups containing dozens of monsters against your party of six. Although fairly simplistic in many ways there are a number of features in the Bards Tale that I liked and can imagine incorporating into my own game.

Combat was turn based and almost entirely textual in nature. The party and its enemies initially faced each other from a distance before advancing into range for combat. Only the first four characters in your party could attack hand to hand with the others having to rely on magic or missile weapons to attack from a distance. Magic played a big part in the game with a number of different types of magic user, some of which could only be accessed when a certain level of proficiency had been reached. One unique class within the Bards Tale was the Bard of the title who could play a number of tunes which produced magic – providing you made sure he had plenty to drink at the tavern.

It was possible for you to encounter wandering monsters who offered to join and fight for the party. I also like the layout and interface for the game which I think is very clear and easy to understand. I’d imagine my CRPG will have a similar type of layout where you can always see how your party members are holding up – nothing worse than not being able to see if a character will last another round.