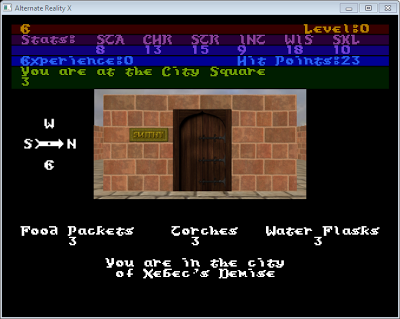 I was fortunate enough to be able to upgrade the old laptop I was using to a decent spec PC. Everything initially looked very positive. Windows 7 installed smoothly, detected all the right drivers and the PC seemed to perform very well. I installed Visual Studio 2008 Express which I am using to develop my Alternate Reality remake and everything compiled fine.

However when I ran Alternate Reality X (as I’ve now started calling it) but it was very slow. SFML (the media library I’m using for the project) uses OpenGL to produce all its graphic output and I’m also using OpenGL to produce the 3D view in the game. The onboard Intel graphics in the PC obviously doesn’t have proper Windows 7 drivers which support OpenGL (despite the OpenGL logo being displayed within the graphic card driver tab within Windows).

The number 3 on the status bar below indicates the number of frames the game is currently running at with the alternate graphics option. It’s not quite so bad with the original graphics which are smaller dimenstions. On my previous laptop (also using Intel graphics but with proper OpenGL supported Windows 7 drivers) the game ran around 30 frames a second. Sadly there seem to be no better drivers available.

I ordered a new graphics card with an NVidia chipset but didn’t realise that the PC didn’t have a PCI Express x16 slot! I’ll get this sorted eventually. In the meantime I’ll focus on parts of the game which aren’t really affected by the slow speed.