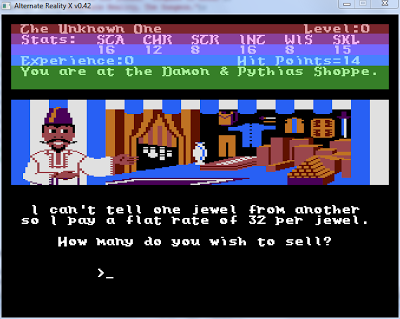 My 10 year old son started enjoying the wonders of Alternate Reality last night for the first time. He’s seen me playing the original games and working on Alternate Reality X plenty of times but yesterday he downloaded version 0.41 of ARX from the website and started playing through what’s there. He quickly got sucked into the game but was a bit frustrated once he realised there are some features missing. In the meantime he’s keen to try the originals.

One of his complaints was that he could not trade the gems and jewels he found from encounters for silver so I thought I would put that into the game next. I’ve added the “Currency Exchange” menu to the Damon & Pythias shop so you can now trade in gems and jewels as well as convert silver and copper to gold to lessen your load ( for a fee of course ). I’m away at a conference for a few days but will add the similar functions to the City banks on my return.