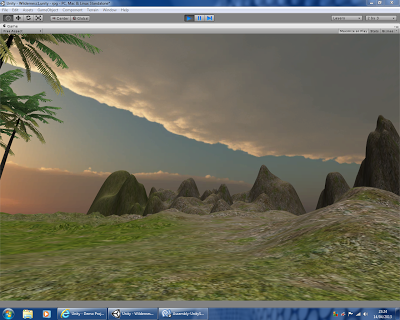 I’ve just got home after being away for over a week so I’ve not done any further work on Alternate Reality X during that time. However I spent a few hours today familiaring myself with the basics of the free version of the Unity game development system and I’m pleased with the results so far. On first use it seems like a very powerful system to use.

I’ve tried out Unity before but have never really sat down with a clear objective in mind and tried to learn some of the basics. I’m reading Beginning 3D Game Development with Unity by Sue Blackman and so far I’ve managed to put together a few scenes and have my character move around in a full 3D environment. After creating some simple terrain using the built in tools and then adding mountains, hills and clearings I was able to add my character and walk around the landscape I’d just created. I have to say I enjoyed the moment where I climbed to the top of a clearing and a series of mountains loomed into my view.

I also played around a bit with creating the user interface and found some nice free assets on the Unity web site for creating menus, text and buttons. I’ve also been researching how Unity would work for more traditional 3D Dungeons and walls such as those in but without the limitations or visual restrictions that my current system has. From my research and the contents of the book it seems that people have used Unity to create all sorts of games from role playing games, first person shooters to 2D point and click adventures.

The next thing I’m keen to try is converting one of the City or Dungeon maps into a Unity scene with a few nice extras which I would have struggled to implement. I’m excited by the possibilities but I won’t rush into making any decisions just yet.

Let me know what you think.