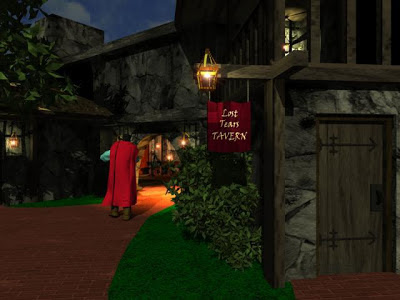 Back in the early days of the mailing list it was not uncommon to have the creator of Alternate Reality, Philip Price post on the mailing list. Dan Pinal and Ken Jordan who designed and programmed Alternate Reality: The Dungeon also posted regularly. Whilst browsing through the posts I came across posts relating to the new AR Online which Philip was set to create working with Monolith and later his plans for a version of AR which he was going to create in his spare time. Sadly neither ARO or the later version progressed beyond the early stages.

There was lots of enthusiasm from fans (including myself) who wanted to try and recreate their own version of AR. Some generated a lot of excitement, others had brief tech demos but that was as far as they went. My first effort was made using Mike Roberts excellent TADS3 Interactive Fiction system (see http://www.tads.org/index.htm ). It allowed you to move around an overhead map of the Dungeon and City (using the original data) but  you could visit Dungeon establishments, buy and sell items and join guilds. It wasn’t possible to create a real 3D view with TADS3 so I moved onto SDL, then using OpenGL and then SFML. I’ve become a parent again, changed jobs twice and moved house during the time I’ve worked on my Alternate Reality. I first started working on my TADS3 AR remake in 2004. Obviously development has not been constant since then but even so that’s quite some time on my part!

One of the things I came across was a roadmap from Philip Price for his remake in his spare time which interested me after my own attempts to produce a roadmap for this project. It was high level but what struck me was that his new Alternate Reality was always going to be very different to the original game, even back in 1997.

I’m now at something of a crossroads regarding my own efforts to port or recreate Alternate Reality. I still haven’t completed the basic port of the City and the Dungeon let alone start work on the new scenarios other than outlining the content on paper.

Philip was understandable tight lipped about his ideas for the new AR back in 1997 – 2000 and I can understand why. For whatever reason he hasn’t been able to or has decided not to revive AR but he may still create a new AR game. There could be a Philip Price AR kickstarter just around the corner for all I know and that would leave my efforts where? My investment in creating new scenarios would be very significant and would really be almost 100% my own ideas so why would I tie myself to copyrighted material that I can’t control. Alternatively Philip could contact me at any point and ask me to cancel the project because there was something he wasn’t happy with. If that happened I would respect and adhere to his wishes.The unknowns and the copyright issue concern me a lot these days with so much significant work still to do.

I’ve been asked to put together only very small expansions for the Arena, Palace and Wilderness but that’s never appealed to me for this project and I don’t think would be respectful to Philip’s original game. Sure I could slap a couple of quick maps together and a handful of new encounter types and some basic quests but that wouldn’t be the AR most of us were hoping for.

Many of you have suggested a kickstarter for ARX or alternatives. I would love to do a CRPG kickstarter and whilst I might not get a single backer at least I would be failing or suceeding on my own merits and need have no concerns about copyright issues or that I’m on dubious legal ground. I can’t do that for an AR related or copyrighted AR type project. If I do a kickstarter it would be for a game of my own which did not contain any copyrighted material or names. And yes I would like to make some money for my work when we’re talking about a significant investment of my time.

I have lots of ideas for new gameplay which I haven’t really seen elsewhere and don’t really want to tie my own original ideas to someone else’s copyrighted work. I realise some of you will be disappointed with my comments or planned approach here but I’ve given it a lot of thought. I didn’t have the skills or tools back when I started my AR remake to have the opportunity to create the game I wanted but I now feel that is possible. My investment in time for development projects needs to be considered against my family, work and financial commitments.

I sometimes feel I’ve made a rod for my own back by sticking too closely to the original games, trying to emulate the originals AND provide a more up to date alternative. What I do want to do is create a CRPG which is as enjoyable as AR and learns from its innovation but I no longer feel I can afford to be tied to its legacy or its original look. It has been a bit of surprise for me how even minor interface or content changes from the original have upset people. However on the other side many people feel my AR if far too close to the original and limited by the content or technology style of the original series. The feedback I have is that many people don’t want a carbon copy. I don’t feel I can continue to attempt to serve everyone’s needs within this one project. I’m not talking about creating a bland AR rip off with all the names removed but one which players of AR (and other classic games) would enjoy which is providing a gameplay experience and level of detail which the popular RPGs today don’t necessarily meet.

Let me know what you think whether via the blog, forums or by email to acrin1 @ googlemail.com

Nothing is set in stone of course and anything could happen in the next few months or year but this is the general direction I’m intending to take with my development project for the time bring.Thanks for all your support and encouragement they have been greatly appreciated and I hope you’ll continue to keep an eye on developments here.