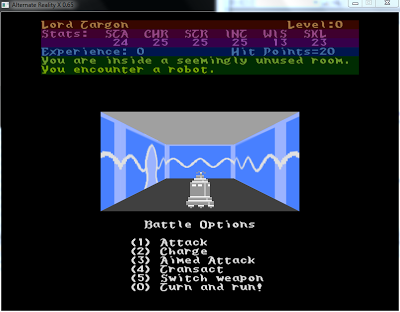 Taking a break from enhancing the combat in Alternate Reality X I thought I would add some of the final elements of the game such as the Dungeon’s final level and the end game. It’s nice to get a change of focus and pace from time to time and helps to prevent me getting burnt out by working on the same thing for too long. Now that I have the final pieces of the game completed I will fill in the remaining gaps so that all the quests are complete and the game can be played through to completion. There isn’t much more to add to make that possible other than putting in a few special locations – most of which are simple coding wise as they are not very interactive.

I thought about posting some additional screenshots from this section but didn’t want to risk spoiling the ending of the game by posting the final screens and text for those who may not have seen them before. Hopefully these other screens will keep you going in the meantime.

We just might have a completed Alternate Reality X by the end of 2013 which would make me very happy. Thanks for your continued support.

One thought to “Alternate Reality X – The end is in sight!”