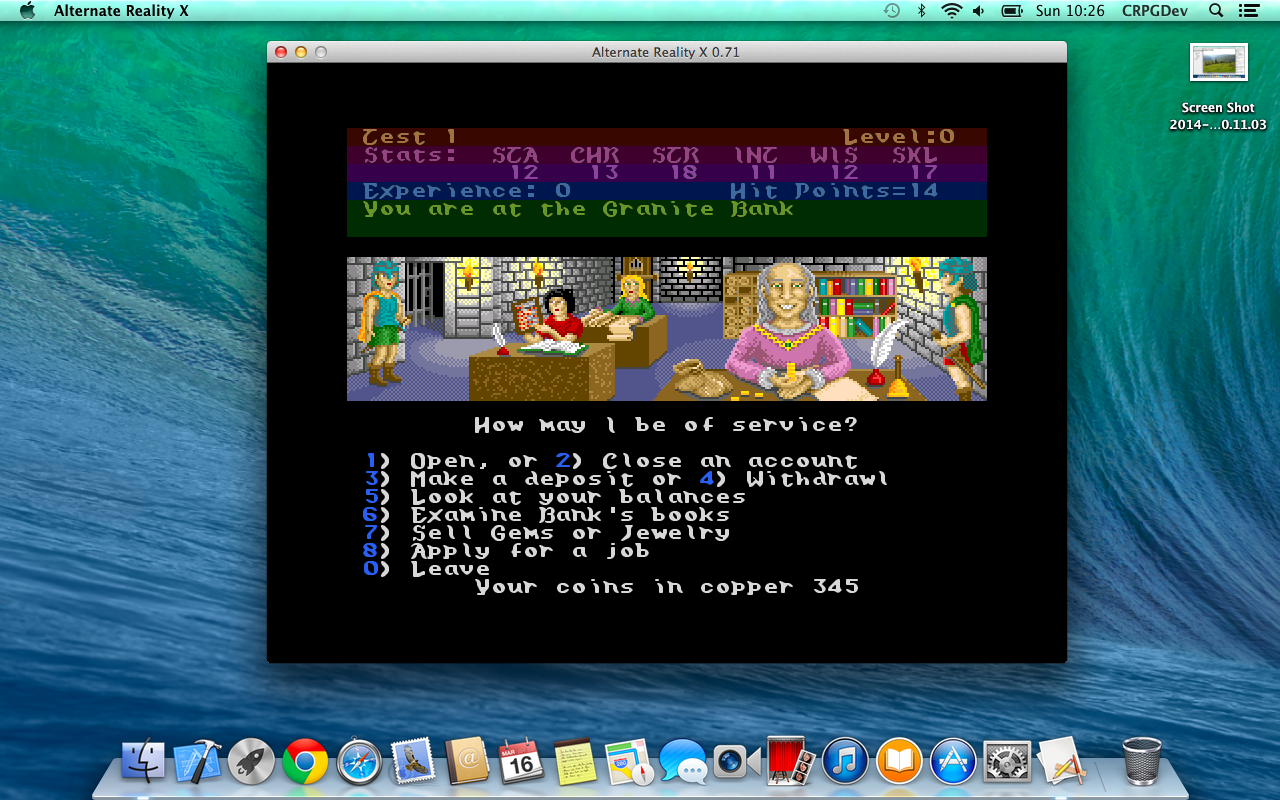 Alternate Reality X 0.71 is now available for download from www.crpgdev.com. I spent a lot of time (about 50 hours sandwiched in around work and family commitments) on this one modifying and tidying up a lot of the display code in the background so that ARX runs much more consistently across different window and screen sizes. I’ve also modified the encounter art scaling code so that encounters in both the original Atari 8 bit style and using Ted’s new art scale properly based on the 3D window size. Another area which annoyed me was the positioning of screen elements when visiting shops and modules. These should now appear neatly centred on the screen or window rather than spread out to the four edges of the screen as previously which I didn’t think worked very well. Hopefully these changes were positive! This release also includes a couple of new encounter images from Ted – a Slime and a Noblewoman (who wasn’t in the original AR).

I’ve got a lot of other visual changes that I have planned for future releases such as a smaller auto map, updated map – hopefully showing the full City and Dungeon 64 x 64 cell levels, encounter animation (at least for the original 8bit art) and lots of new wall textures. I may add a little resolution / display options utility as well so that people don’t have to edit arx.ini by hand. I also need to clean up some of the interface generally in terms of text input and on screen prompts (or lack of)  which confuse people. Expect desktop icons for both the Windows and Mac OS X versions very soon 🙂
The other major development for me is my first ever game release for Mac OS X. I now have a version of ARX 0.71 available for download on Mac OS X. I can’t really say how satisfying it’s been to be able to make this available for people. Thanks to everyone who has provided feedback and support for this release. Currently it’s only available from this link but I’ll add a proper page / description shortly:
www.crpgdev.com/downloads/ARX_OSX_0.71.zip
I had to tweak the security settings for the App but this only takes a few seconds and OS X will tell you how when you try and run the game.
Really pleased with SFML running on Mac OS X. The latest 2.1 version seems to be work really well and comes with xCode templates to get you started. Once I got past some of the differences with using xCode and became more familiar with using a Mac in general then SFML seemed to do its job very well. Laurent Gomila has done such a great piece of work with SFML since it started a few years back. If you have any interest in game programming then you should definitely consider SFML 2.1.
In terms of game play updates for Alternate Reality X, I will be focusing on improving encounters and items in the game for the 0.72 release. This will include adding multiple body parts to combat, surprise and waylay, knock downs, fleeing, blocking, stun – you know what I have in mind. I could really use one of those Wands of Cold to cool down those hot headed Flame Demons. Alternate Reality for me is very much about the encounters you have so I really want this element to be very strong and close to the original games. Don’t be surprised if the more friendly characters begin having a lot more to say that they used to – of course it may not always be useful or truthful!
I also want to include some of those juicy treasure items that made the City and Dungeon so enjoyable – eyes, scrolls, trumps and lots of weapons and armour. Some of these essential additions will probably require some fairly major changes to my older code which may require changes to the save game format. I’ll see what I can do though.
I’ve had a few queries about Stone of the Citadel recently and whilst there isn’t currently a downloadable demo work on it has continued in the background (mainly focused on design and content). This will be a Unity 3D project. The initial release will focus on creating your party of adventurers and I think will show how SOTC will capture the best of the classic CRPGs whilst adding some spice of its own. Expect a playable multi-platform demo in the near future.
If you enjoy what I’ve been doing with Alternate Reality X or other CRPG Dev projects then please consider making a small donation via Paypal to cover my time and web site costs. Please also keep your feedback, emails, questions and words of support coming – they are a great encouragement and help shape my future releases and games. Thanks as always for your support.