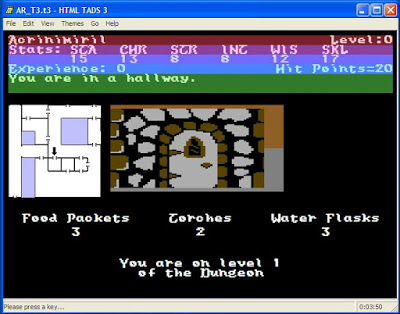 As I’d said previously I wanted to review what I’d achieved with Alternate Reality X (ARX) and what I needed to do to take it a step closer to completion. I’ve given the project a lot of thought and wanted to post an update.

I found some of my early AR images on the internet dated 12th June 2004. Eleven years ago! These are very old when I was using Mike Robert’s excellent TADS 3 Interactive Fiction system to read the AR binary map files and display an overhead view. Thanks to Mike for answering my often off topic questions when I should have been using TADS 3 to write more adventure games 🙂 Here are the images:
My next move after moving away from using TADS 3 was to post a little SDL based demo of some randomised Dungeon combat with various Dungeon denizens things have changed a lot. My original demo looked very authentic and just worked. I liked that version 🙂
My original goals for my Alternate Reality remake were to:

It was not my original intention to improve the graphics and sound or to try and complete the other scenarios. The display and audio options as well as multiple screen resolutions have all added to the development time for me. Not ideal when this is really my first proper programming project 🙂
Since then a lot of time has passed and over the years the project has started and paused a number of times due to other commitments and changing ideas about direction. My conclusion now is that the best direction for now is to return to my original goals for the project and try to bring it to a sensible conclusion, or at the very least bring this stage to completion so that there is a solid foundation for myself or others to build on (e.g. adding a new scenario).
The other conclusion I’ve come to from the emails and messages I’ve received over the years is that the vast majority of people are really looking for a fairly faithful port of the original games – including the original 8bit graphics and sound. I really need to pair back the project to its core so that I can rewrite some of the dubious code in the background. This is turn would provide a solid platform for possible future scenarios to be added – once the City and Dungeon are 100% implemented.
There are a couple of other things I’ve considered. SFML’s use of OpenGL causes a lot of issues foe people who don’t have fully compliant OpenGL video drivers on their Windows PCs. This is a big concern for me with Windows 10 now on release.  A switch to the SDL media library which I believe doesn’t use OpenGL would probably help a lot with this. I’ve also decided that for ARX any ports to Mac OS X or Linux would probably have to be carried out by someone else. Unity 3D I’ll use for new projects rather than ARX.
So where does that leave the project?
Here’s my current plan and thoughts for Alternate Reality X development:

6 thoughts to “Alternate Reality X – Back to Basics”