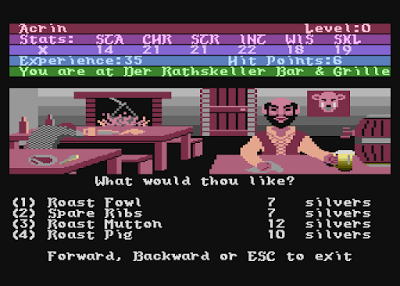 As mentioned previously I was investigating a possible move to using SDL as an alternative to the SFML media library. Whilst I’m not a 100% certain I’m going to stay with SFML it’s looking extremely likely. The main reason for this is that I understand from what I’ve read that unlike SFML, SDL isn’t able to easily mix it’s native graphics with an OpenGL view. One of the things I found useful with SFML was that I could limit my use of OpenGL to just drawing the 3D City / Dungeon view whilst using SFML’s 2D functions for everything else. The disadvantage I’ve found with SFML is that a number of people have had issues with the OpenGL support and video drivers on their Windows machines. There are a couple of changes I can make which might address the problems under Windows and flag up the possible impact on gameplay at start up for the player.

I’ve been spending some time trying out the City and Dungeon using the Atari 800 emulator (version 3.0.0). This emulator seems reliable and hasn’t yet crashed on and lost my emulator settings which I found to be a problem with Atari 800 Win Plus. One of the first things I’m doing is making some changes to simplify the display options to make Alternate Reality X look more authentic and make best use of the original Atari 800 graphics as I didn’t like the way some of them appeared when stretched by my multiple screen options. In practice this is likely to mean more limited screen display options (at least for the next release) but will hopefully make for a better Atari 8bit look which most players are apparently using when playing ARX. I will still be leaving in the support for alternative media but it’s not going to be a focus in the next few releases. 672 by 480 pixels is likely to become the base resolution for the game from the next release with options to have black borders or not. This will give you a very accurate, double sized version of the original and will allow me to match the display very accurately with the original versions.

One of the benefits about my investigations into the SDL media library was that I’ve been reading a SDL game programming book and this has made me rethink some of the ways the game programming could be improved to make better use of the features of C++. These would probably simplify development, improve my code reuse across multiple shop type modules and reduce the risk of crashes due to my ill informed programming techniques. These are general C++ game programming techniques – just as applicable to a SFML game as a SDL one.

These might seem like very trivial points for me to be focusing on but having the display “look right” for me will make a big difference to me. Release 0.8 is now under development so watch this space.