As mentioned previously the encounter code in ARX had a lot of issues and really needed some serious work if I was ever to make it complete and feel authentic to the original Alternate Reality combat. I’ve basically taken apart most of the encounter code before refactoring it and putting it back together again. This has taken me a lot time and a lot of hours but I feel I’ve made a lot of progress.

The encounter code is now much more sensibly organised and structured and it is much easier to add in additional encounter features. The code is hopefully a lot more readable now, not only saving me a lot of time when I add to it but also meaning that others will be able to understand it a lot more easily should they want to. 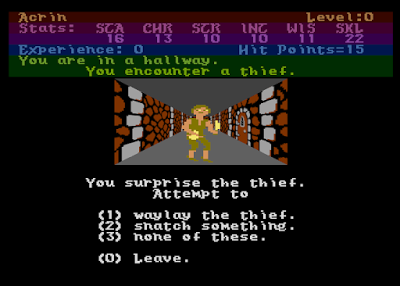 I’d crammed a lot of only vaguely related code into the encounter module including the character and monster encounters themselves as well as their weapons so it was desirable to split these into their own source files. My plan is to gradually make these much more object oriented with player and opponent objects sharing a lot of code and functions for much better consistency. 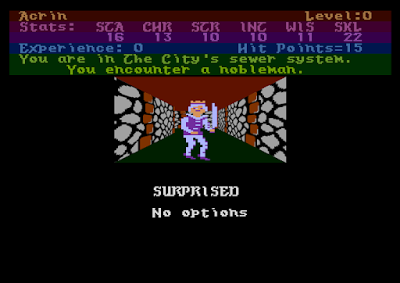 I’ve been adding in new encounter features that were previously missing in ARX such as the player surprising encounters (or in turn being surprised) or being stunned and missing a turn. I’m still doing a bit of testing of the original game to understand exactly ow waylay and snatch should work but it’s good to have them in the game finally. You can see these illustrated here. The next change will be to add the Dungeon style combat messages and implement different body parts for the player which aren’t fully active at the moment. 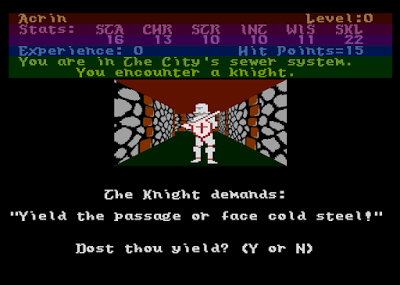 It shouldn’t be too long before the next release is out. This will be focused on completing the remaining encounter features. I feel this will make ARX feel a lot more playable and authentic and will herald a big step forward for the project. Thanks for your support and patience as always.