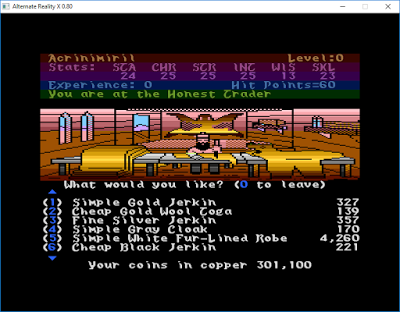 Following my review of 2016 I wanted to follow up with a taster of what you can expect to see and play in the coming year. There are other projects and interests I want to cover and talk about in 2017 but this post focuses solely on Alternate Reality X which is my top priority. Here is an outline of the key areas of development I’m planning to complete during 2017. There may be some changes to the order of this list but this is the general outline I’m working to just now.

Basically updating all the existing code in the game to use a more flexible item and inventory format, essential for implementing future changes to custom items, enchanted items and procedural generation of City clothing items. Currently this code supports weapons, armour, clothing and a number of special “quest” items.  The changes to the City Smithies and Damon & Pythias shops are completed. I need to add in the procedural generation of clothing in the City Shops (where you can buy a compass) and update the existing code for unique items scattered around the Dungeon and quest items (E.g. the troll and goblin ring halves). This has taken a long time as the items and inventory touch so many different areas of the game but all the time consuming, hard work is now complete. In the next release you’ll now be able to pick up and use weapons which your opponents used, introducing a lot of new weapons for the your Alternate Reality character to play with.

This is partially completed. The main new features it will introduce to the game are the option to sell old weapons and to have a custom weapon made. The main work to do is getting the correct menus in place and the custom weapon creation code which I don’t see as being too difficult. 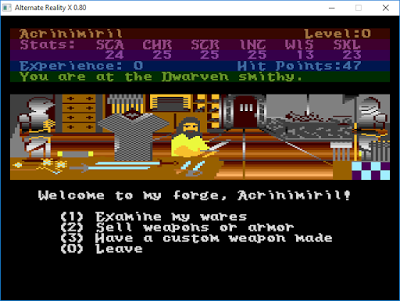 Despite having finished the Dungeon for the first time a few years back, I had never saved up enough gems to have a custom weapon made. One thing I thought would be cool (and easy with the new ARX item system) would be to allow the player to name their custom weapons but on looking through the original code for the Dwarven Smithy it looks like that feature was already in the original game! Alternate Reality continues to surprise me after all these years 🙂

These include those unique items on the Dungeon floor which I’ve not added yet and the special items you find after a successful encounter – wands, trump cards, horns etc. This won’t make it into the next release due to all the work I’ve done on refactoring my existing code to work with the new items and inventory but is high on the list for future releases. Only a handful of City items remain to be added to ARX.
I need to introduce a new “effects” system which holds timed and temporary events (e.g. if wearing a crystal belt you get a stamina increase, you’ve drunk a potion of invulnerability sharp). The effects system is also required to enable the remaining guild spells to be implemented. I don’t see this as being difficult to implement as I’ve given it a lot of thought but it’s a substantial piece of work. I also need to do some research into how encounter treasure selection works so if you have any ideas on that please let me know. Once implemented I think the results will be quite visible to players so hopefully a good boost to gameplay. For me the Dungeon always had some of the best treasure of any CRPG. 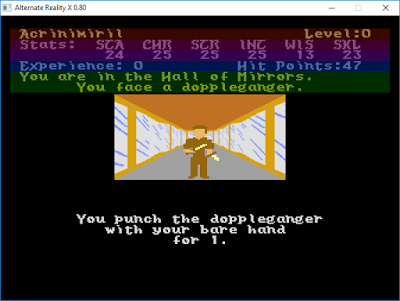 Basically adding in the few special locations which are still missing that are required to complete the Dungeon and the necessary dialogue and quest items. A lot of this is already complete but hasn’t been tested in a long while. I seem to remember the Oracle took a lot of work and might need some bug fixes. Off the top of my head I think the Clothes Horse and Great Wyrm may only be in game as placeholders. Occasionally I go back and find that I’ve already started part of AR though which is pleasant surprise 🙂 When the Dungeon Quests are complete there will be enough Alternate Reality recreated in ARX that you will be able to play the City and Dungeon through to completion!

I’ve already added some support for multiple screen resolutions and windowed vs full screen displays through the arx.cfg configuration file but there aren’t currently any good scaling or filtering options available for players to make best use of those larger screen sizes. I’d also like to make it easier for you to adjust display options whilst the game is running so players can easily skip through options to find the one that best suits them. With so many people running larger displays now it’s not really acceptable for me to limit development to only a couple of window sizes. Emulation front ends like RetroArch make use of some very high quality filters and scalers it would be great to introduce these into ARX if it wasn’t going to be too much work. I also want to introduce some new (optional) display elements along similar lines to the automap that may add to players enjoyment or reduce frustration. 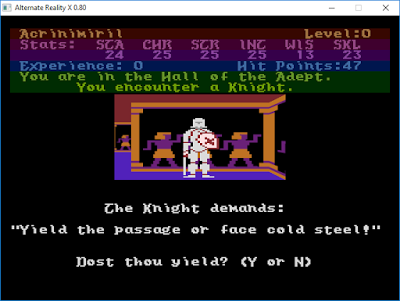 One of my original goals was to have multiple media packs for ARX and thanks to the superb work from Ted Cox and Furious we’re pretty much there. Due to a few different reasons I’d temporarily removed these but I’m keen to reinstate these in the next few months and hopefully expand them further.

There are quite a few Mac ARX players and I’ve now reached the point where a native Mac OS X version will no longer be the big piece of work it once was – partly because I’m just much more comfortable with coding and development tools than I used to be. I have another couple of versions in mind for other platforms but I’ll see how well the items above progress first.

You may well have looked at the list above and thought “When can I expect to see X?” or “Will Z be included in ARX?”. As you can see from the list above I have a LOT of ideas for areas of work planned for development and completion. Sometimes I think something will be difficult and it comes together fairly quickly, other times the opposite happens.  So I’m going to hold off on any release 1.0 date predictions – at least for the time being. What I can promise you is that I have lots of plans for further developing ARX in 2017, making it a lot more complete and hopefully more enjoyable to play.
Finally I just wanted to say a massive thank you to so many of you for sticking with me on my Alternate Reality remake project through the years of development.  I know it’s been a bumpy and sometimes inconsistent ride along the way. I’ve often been amazed by your kindness, support and sheer enthusiasm for what I’ve been doing and for Alternate Reality in general. I’ll do everything I can to try and deliver on the promise of the original project. Wishing you all the best for 2017.