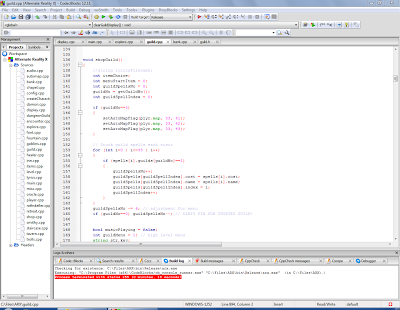 Release 0.61 of ARX will be released as soon as I fix a bug when entering guilds
which leads to a crash.

The main change in this release is that at
least on a temporary basis I’ve switched to the CodeBlocks development
environment using the MinGW C++ compiler. There were 2 main reasons for this –
firstly compile times increased significantly with Visual Studio 2010 from a few
seconds for a change to about a minute which was really making small changes
very tedious, and secondly CodeBlocks is available on Linux and Mac making
native versions of ARX much easier to produce as the same environment can be
used across all platforms. The switch of environment has raised a few new compile
bugs though which I need to deal with before releasing 0.61.

From a
player perspective the other major change I’ve made is that I’ve almost 100%
dropped the use of “RenderTextures” in the SFML media library. My use of these
created lots of problems for players with Intel onboard graphics and a few
issues on newer machines I had access to. My code was also messier and harder to
debug when I had these in. My new 0.61 version works much better on old harder
which I’m much happier with. I don’t see why a player shouldn’t be able to use
an old laptop to play something based on a 25 year old game series just because
it has intel graphics.

I’ve also added code to better handle monster
vulnerabilities and invulnerabilies to various damage types. Bit more work to do
there though to make it complete.

There are a few new encounter images
which I’ve been sent as well which are included for players playing ARX in a
full window. These will hopefully gradually replace the handful of placeholder
MM6 images I’ve used currently.

Hopefully I can have this release wrapped
up fairly soon.