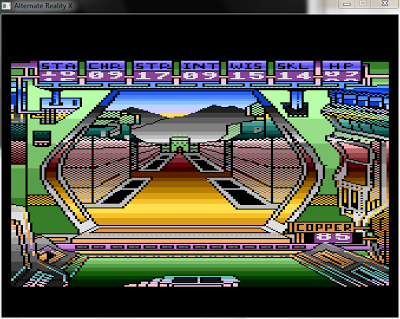 After taking almost a year between the first and second demo releases for Alternate Reality X (ARX), I’ve vowed to release updated versions more frequently. However I have been really busy with work and been away on holiday so I’ve made very little progress since the demo release at the beginning of August 2010.

I have started working on the City character creation and now have it at the point that it’s mostly complete. I still need to fix a few things such as the colour of the counters and music / sound effect timing. I’m not attempting to match every element of the original character creation sequence but hopefully people will understand that. I’m rather spend the time on key parts of the game such as combat and shop functionality.

My graphic card issues are now resolved so I have ARX running at about 60 frames a second – much better than the previous 6 frames!

Over at the ARX forums there a number of bug reports which I will try to resolve in the next few days. Possibly the worse is the teleport bug which places you outside the level 2 map. I think this will be due to me using level 1 teleport coordinates when adding the level 2 dungeon map. Thanks to dalimar for pointing these out.

I’m hoping to finish off the city character creation sequence and fix these bugs for a small 2.1 update release sometime this week.