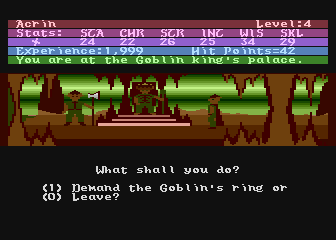 I now feel I’m back into the swing of coding for my long sterm Alternate Reality remake project. I’ve now completed moving it over to use the latest version of the SFML 2.0 media library and I’m pleased with the results such as the automap display now displaying instantly.

I’m now working towards releasing a new version of ARX. This so far contains bug fixes, a few new placeholders for shops / modules such as the  Dungeon Chapel and pretty much the full Troll / Goblin ring quest. I’ve also added in the Dungeon fountains and have made a start on adding more features to the City Taverns. It also features an updated City map provided by Dalimar with all the shop door signs now in place and the Arena walls using the pillar texture. You can also move / wrap from one side of the City map to the other using those secret doors – instead of appearing “outside” the map as in previous versions.

Hopefully have this mini release which I’ve marked as version 0.41 out in another week or so.